We had a Neighbor’s Lunch this weekend at Sonny Bryan’s Smokehouse in West End. I really love these experiences. About half of our group consisted of young adult/professionals; the other half consisted of poor neighbors. 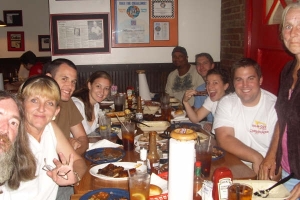 I decided to walk around downtown for about a half-hour before lunch in the hopes that I might meet someone to invite to our lunch.

I just prayed as I walked that God would show me someone to serve, to befriend.

And yes, I had the nervous butterflies. I knew God would have to work in order to push me past my anxiety about cold-turkey invitations.

As I walked God brought a text to mind in Jesus’ teaching about inviting people to a party (Luke 14:12-14):

Then Jesus said to his host, “When you give a luncheon or dinner, do not invite your friends, your brothers or sisters, your relatives, or your rich neighbors; if you do, they may invite you back and so you will be repaid. But when you give a banquet, invite the poor, the crippled, the lame, the blind, and you will be blessed. Although they cannot repay you, you will be repaid at the resurrection of the righteous.”

At the very end of my walk I saw a man sitting on a bench with a Wal-Mart sack beside him. I walked by him, looked him in the eyes and said, “Hey, how’s it going?” He responded politely.

Then I heard, “Excuse me sir. Do you mind if I ask you something?”

That was all I needed. Thank you, God.

He explained that he had just moved a few weeks ago from a large city in the north to find work in Dallas. He was on the streets, and he was trying to find a way to get to Wichita Falls because he knew someone who could give him work there. The bus fare cost $43. He showed me the $30 he had and asked if I could help.

I just happened to have $15 in my pocket.

I told him, “You know it’s funny that you ask because I’ve been walking around praying that God would show me someone to help.”

That resonated with him — he told me he was also a believer.

Paul ended up coming to lunch with us and eating all the ribs he could handle. After lunch, we sent him off with enough for bus fare to Wichita Falls. We hope to hear from him again when he’s back in Dallas. 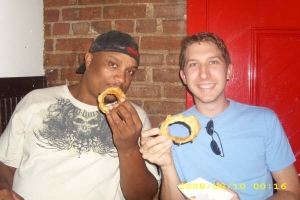 I love divine appointments. It seems that God works out all the details when I merely make myself available to him.

At future lunches we’ll invite everyone to show up early and go out into the streets and alleys praying that God would lead us to new friends. In fact, why couldn’t we do that for all our events?

—
On Sunday night, we talked about immigration and its relationship to spirituality and politics. Go figure that three of our poor friends from our Neighbor’s lunch came—one of whom regularly protested on behalf of two imprisoned border patrol agents, another of whom was married to an undocumented immigrant! What an interesting conversation it was.

It was also amazing to see conversation between the rich and poor, the educated and less educated. I think we discovered commonalities between the two we would have never expected.

Seriously, where else in the world can the rich and poor rub shoulders like this? That’s the beauty of the church.

In the words of one of our young adult friends at the gathering, “I could feel the presence of God with us. It was beautiful.”

We discovered in scripture God’s openhandedness and mercy toward the “stranger” or immigrant, as well as the ways certain responsibility was expected of the immigrant—particularly when the immigrant was living among God’s people.

If you’re interested in a good book on the subject, I’d encourage you to pick up Christians at the Border by M. Daniel Carroll R. It’s a short read and a good introduction on how the scriptures speak to the topic of immigration.

2 responses to Neighbor’s Lunch and Immigration